Fulfilling the Promise of Computers

Two studies hit the news in the Autumn of 1998. One showed that the number of hours spent on the Internet was directly related to the level of depression of the user. The other showed that a great way to screw up a kid's education was to introduce computers into the schools. These are the unfortunate outcome of a nascent technology being badly misused. The solutions lie in pressing forward with the technology at all deliberate speed, while accepting and working within the limitation of the crude technology of today.

Human beings are designed to interact with each other. Not with computers, and not with some disembodied string of ASCII characters showing up on a screen. They crave warm human flesh and blood. If we are to have any semblance of the kind of multi-level communication through our computers that people need to thrive, we are going to have to go to high-bandwidth communication. Not ISDN, T1, or even T3. We are going to have to get serious about fiber, and we are going to have to show actual-size, real-time images of each other face-to-face, coupled with high-quality audio and devices that allow us to see and experience touch, as well. 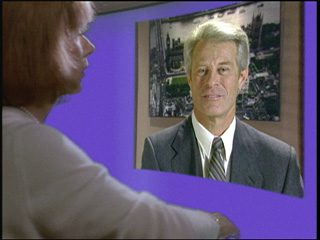 In Starfire, we show just that kind of communication, as far removed as you can get from these dinky little 2 inch square images that now float lazily across the net. Anything less than this kind of realism and the depression will continue.

Jakob Nielsen computed that the Starfire console could soak up 1 terabyte per second of network communication. That's a pretty far cry from 56K. The phone company pulled off a major scam in the so-called move to fiber: they pulled up 4800 pair twisted-pair cables and replaced them with a few fibers with close to the same capacity. Then they sold the salvaged copper for more money than the fiber cost to install. They then announced that "the last mile," the small cables finally terminating at our houses, were prohibitively expensive to replace. Unfortunatly, until that replacement happens, the real promise of the communications revolution will remain that—just a promise.

There's not a lot most of us can do about this directly, but we are opinion-makers. When someone asks you if T1 speeds are enough, mention Jakob's figure of 1 terabyte per second.

In 1928, commercial broadcasting began in the United States. The pictures were transmitted over the narrow bandwidth of a single AM radio station. The pictures were around one and a half inches tall and ran at a frame rate of around 15 frames per second. Sound familiar? Commercial TV never took off until the bandwidth was increased 600 times, to provide room for large-screen, real-time images. Seventy years have passed, and our new technology is exactly where TV technology once stood. It took TV another 20 years to finally achieve the bandwidth it needed. We can only hope it will not take that long this time around.

Al Gore, Vice-President of the USA, several years ago launched a short-lived effort to build the "Information Superhighway." The project died aborning when private industry cobbled together an expanded Internet almost overnight.

Gore's father was responsible for pushing the real superhighway project, constructing the USA Interstate Highway System in the second half of the twentieth century, tying together all 50 states (as long as you get a good running start on the Hawaiian interstates). The government built the roads, and private industry populated them with cars,trucks, and busses.

Were Al Gore's people a bit more technically savvy, they would have recognized that they needed to follow the exact same path this time around. Again, the government needs to build the physical infrastructure, ensuring that every USA citizen has access to fiber from both home and office.

But why should the government get involved? After all, aren't the phone companies and cable companies already doing it? No way. They are not doing it now and they have no intention (at present) of doing it in the future. True, the phone company has been pulling up copper cables and replacing them with fiber, but only trunk cables, tying local offices to each other. The economics of this are marvelous: Pull up a 4800-pair copper cable, drop in a couple of fibers with similar total data-handling capacity, and sell the copper for enough money to pay for the operation. Plus, if you're lucky, pick up a government subsidy at the same time.

This scam is in no way related to actually wiring (glassing?) this country for future communication.

Adding to the backwardness of thinking is the conventional wisdom that no matter how high the bandwidth going into the home, a simple 14.4 or 28.8 kbaud line coming back is more than sufficient. Since we'll all be at home just sucking off this more advanced glass teat, as Harlan Ellison so eloquently puts it, why would we need to be able to send information as well?

Videophone, for starters. Yes, the conventional wisdom holds that videophone will never take off, but that is so hopelessly wrong-headed I won't even argue against it. Just build the fiber network, then sit back and watch what happens. The TV "revolution" of 1928 was nothing compared to what happened in the post-war era when the "real" technology arrived. What we are using now is hopelessly crude. People will laugh 100 years from now when they talk about those early pioneering days. Wouldn't it be nice if we could start laughing during our own lifetimes?

The problem with computers in schools is that they are a scarce resource, so people hoard them in an attempt to ensure they are "utilized to the fullest measure." That translates into dedicating the computers to "important" stuff, like brain-dead tutorials.

The most important use of a computer for a school-age child remains word processing. Access to word processing frees kids from all the formality of writing instruction that leads to stilted sentence formation and a serious lack of style.

The problem is that computers with word processors have to be casually available to every student all the time (at home as well as at school). That's more of a commitment than the schools have yet made. More than they are likely to make any time soon. So the computers remain chained up in special rooms where they are horribly misused.

Computers will eventually become useful for more than word processing. Someday, children may have simple access to really useful information on the web. Someday, we may have the technology to capture the experience of working with a gifted teacher. That day is not now, and schools need to stop blowing money in the attempt to buy the future. Instead, they should expend their budgets on really low-cost, easy-to-use computers for all. A machine like the iMac, at a sharply-discounted school price, or an eMachine at its regular price, comes to mind.

I agree with you about PCs in schools, in general. I think, though,
there may be a more important use of the computer for school-age
children than word processing.

I have this theory that Kragen is a programmer.

It saddened me to read a couple months ago, however, that boring subjects like calculus and the like actually do help develop people's mental discrimination so that they are less likely to think that space aliens are living in Quaker Oats. Seems like a high price to pay, though. Now, I, myself, can think of nothing I would have rather done in school than to write a >1000-line program. Seriously. Two things concern me about making it mandatory, however. The first is that some other people I know would probably have preferred eating ground glass to writing a >1000-line program. The second is that the School System can undoubtably work up enough rules, regulations, and instructions to turn even this delightful task into a nightmare of drudgery.