I didn’t set out that day to become a hero. I had slipped away from the InterCHI conference in Amsterdam and travelled half-way across Holland aboard trams, trains, and busses to the town of Lisse, solely to experience the beauty of Keukenhof Gardens, a vast landscape of trees, rocks, streams, and lakes, alive with six million gloriously blooming tulips--and what looked like an equal number of gloriously blooming tourists. 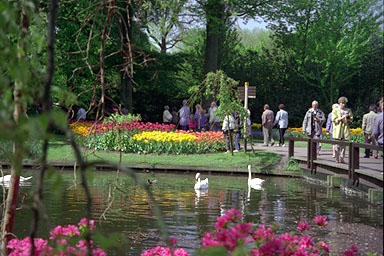 I was well into my third roll of film when I spotted a swan sitting nonchalantly on the end of a wooden dock down by the lake, oblivious to the crowds of people nearby. I crept carefully down the stairs near the opposite end of the dock, then edged towards her, framing her against the water- and tulip-filled background beyond. As I prepared to shoot, some raucous teenager clomped down the stairs behind me, startling the swan into this perfect alert-swan-on-duty pose just as the camera went off:

Then the clomping ceased, and I heard a loud splash.

The next few moments played themselves out in slow motion. When I looked behind me, I saw not a goofy teenager, but an old man, well into his eighties, lying face-down in the water, and not moving. I instinctively reached out to him, intending to drag him into shore like some errant air mattress, but he was tantalizingly just out of reach. I had begun to think about whether I might find some stick or something to edge him closer when I noticed a profound difference between the old man and your average air mattress: the old man was swiftly sinking towards the bottom.

People who are drowning are supposed to be noisy and paddle around in frantic determination to stay alive. The old man was not following the rules. He was stunned and lay perfectly still--no struggling, no breathing--becoming less and less visible as he settled in the murky brown water.

It normally takes me about an hour to slip into a 75° pool, a shivering inch at a time, but I was in that filthy, frigid lake instantly--clothes, shoes, wallet, passport, and all. I clasped the man from behind around his upper body and lifted his head out of the water, swiveling his body around toward the dock where several pairs of waiting hands lifted him out of the water. It was all over in the space of five seconds.

I should tell you that this was not my first watery rescue: since early boyhood, I’ve rescued hundreds of souls from the treacherous grasp of the Pacific Ocean undertow, from the boiling hot springs of Lassen Park, from the snapping jaws of Great White sharks circling in Monterey Bay. The critical difference in this rescue is that it had occurred in real life, rather than in the lair of my boyish imagination.

In my fantasies, I had tended to dwell heavily on the post-rescue events, which involved brass band receptions, the mayor handing me the keys to the city, and, in earlier, pre-PC times, a bevy of young lovelies bestowing kisses upon my fair brow. The spectators would join in, lavishing their attention on me, while the victim would stand demurely to the side, nodding his or her head in grateful appreciation. I expected no less at Keukenhof and was amazed as I began struggling from the water--absent any help from waiting hands--to discover that not only were the mayor and the band conspicuously absent, but so were the witnesses.

It turns out that in real life, the crowd is much more interested in the victim than the rescuer. (I believe they speculate that the victim, having gone off and done something foolishly entertaining once, just might do it again.) So my supposedly loyal spectators had all trouped off in the wake of the victim, who was being hustled toward the nearest building, leaving me totally alone.

Well, not exactly alone. A new crowd had formed. Completely unaware of the heroic action that had taken place only moments before, they had heard a series of splashes and were now being greeted with the sight of this middle-aged apparition dragging itself out of the muck and onto the dock. They could only assume I was quite mad and had gone in for a casual swim in all my clothes.

At this strange twist of events, I slunk away, following the trail of water left by the victim, assuming that someone might be drying him out by now, and they just might dry me out, too.

The crowd gave me wide berth.

I was greeted in the nearby restaurant by the manager who bestowed upon me four lovely, if petit, tea towels, then withdrew. The victim, I noted, had been given hundreds and hundreds of these same towels and was standing in the midst of perhaps a dozen friends and loved ones, where he was making a most wondrous recovery, even as he was being patted into a state of positive dehydration.

I stood in my puddle of water perhaps fifteen feet from the victim’s puddle of water and dabbed at myself until the towels were as wet as my clothes. I continued dabbing, in the idle hope that I would soon hear the sound of the brass band tuning up, but it was not to be, and by now the towels were so wet that my still-soaked clothes were beginning to suck some of the water back.

Still I waited, purely out of politeness, least one of the victim’s loved ones might feel compelled to deliver some embarrassingly maudlin expression of gratitude (even if it would be in French, which appeared to be their only language), but that, likewise, was not to be. I left my puddle of water and slipped silently out.

Clouds had formed over Keukenhof, and a brisk breeze sent chills through my body. I kept mumbling about brass bands all the way back to Amsterdam, shivering aboard the busses, trains, and trams, only confirming in the minds of those who saw this strange, wet character the intensity of his insanity.

Over the next 24 hours, the fable of my heroic rescue grew ever bigger and better in my mind. As in Dr. Seuss’s tale of the plain horse and wagon on Mulberry Street, I embellished the tale with a baroque gaudery of exaggerated facts and fantastic detail. By the end, I distinctly remembered the ominous dorsal fin of a Great White snaking toward the victim, even as I snatched him single-handedly from the water, all at unthinking peril to myself. 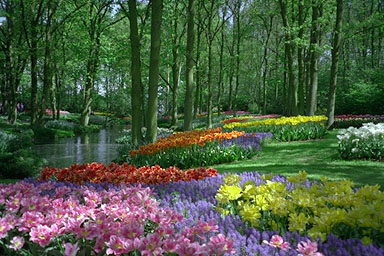 I returned to Keukenhof that following afternoon to see the rest of this most beautiful spot on earth. The gardens were even more striking than I had remembered, and the nearest thing to a dorsal fin was the wiggling tail of a wild duck diving in hot pursuit of a fish. But the waters were indeed dark and murky, and when I stood again on the dock, I felt a chill, realizing that the old man had been sinking just as fast as I remembered. He really would have completely disappeared within another four or five seconds.

I had done nothing that anyone else in that crowd of some fifty people watching would not have been doing a second or two later. I had simply had the privilege of being closest and first. During those next two and a half freezing cold hours, I had felt fulfilled, felt more alive than I had in a long, long time. A trail of people from Keukenhof to Amsterdam had looked at me funny, but I knew that, for once in my life, I had gone in the water with all my clothes on for a noble purpose. And my feat, while largely ignored, had not been ignored entirely: Indeed, the manager of the restaurant had bestowed upon me full rank and honors, even as he turned from the victim’s circle to hand me the four dainty tea towels: